This is fucking insane

I’ve got a story for all of you- the family event that should be made into a Lifetime movie. It’s long, so I’m gonna start a thread.

The entire thread is fucken insane.

A modest proposal to improve Twitter—and perhaps the world

Source: The Case Against Retweets – The Atlantic

I went ahead and made the change on tweetdeck, the interface I use on the desktop: 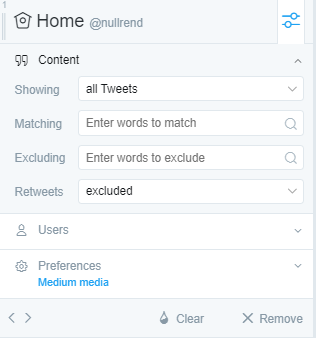 But this doesn’t take any effect on my mobile client of choice, Talon, and it’s a total pain in the ass to go hunting down a tweet that scrolled off the screen.

Meaning I had to rethink my approach. In the next few days I’ll be disabling retweets for pretty much everyone I notice retweeting more than they actually tweet or reply to other’s tweets. Just in the time I wrote up this blog post I disabled RTs for ten people. The threshold seems to be when someone hits the RT button for more than 4 tweets out of every 10.

It’d be nice if twitter enabled an option to disable RTs globally and then you decide if you want to turn them on for someone… but this does not favor their advertising model since you’re purposely limiting the amount of viral content making it to your timeline regardless of the client you’re using.

This is probably a good thing, all in all.

Gordondoes them every now and then, so I’m going to start doing them too:

The most pressing need that I have for myself is a replacement for Tiddlywiki that I can run from this server; it’d probably require me to configure HTTPS but that’s another project worth learning. The main issue then becomes choosing an appropriate wiki that is about as flexible as tiddlywiki without requiring the use of any extensions on the browser. Running this from the server would also allow me to update it from any mobile devices. Tiddlywiki is decidedly desktop software; the clients available for on Android all suck. This is why it’s so pressing for me. I need something that lets me document my life so I can offload stuff from wetware onto software. I’ll keep trying using simple text for now… but I think my mind simply works better using a wiki paradigm. I really do wonder what Twitter will turn into once it doesn’t belong to itself, though.

I got into an argument with someone, but the very end of it came down to this: 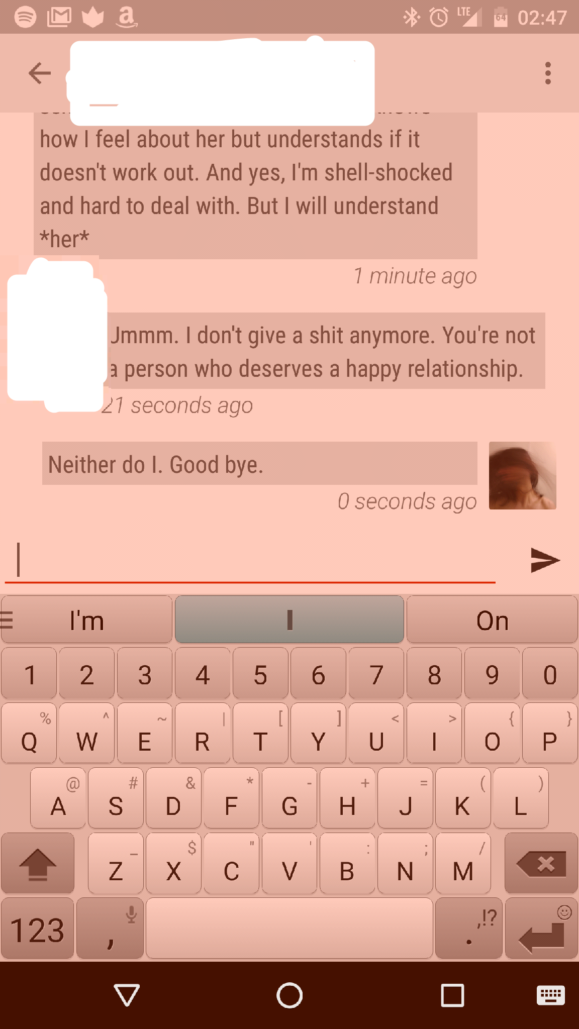 This person actually said that I do not deserve a happy relationship.

So… does he wish for me to be in an abusive relationship? No relationships at all for the rest of my life? No friendships (since you can be happy with friends) then?

Still. It all arose from something that he was offended by. We argued a bit but once we saw we couldn’t make up for the differences we parted ways. And then he said that.

You do do, my good sir. I hope you don’t get your businesses bankrupted, that your significant others don’t do you wrong, that your children (if you have any, that is) don’t regret having you as their parent.

I don’t believe I’ll have a relationship that I will be feel happy and content with. But that’s for me to find out and to strive the opposite. It is not for you to declare.

I wish you the best in life simply because you wished me the worst. I have seen some of the worst and I would not wish that upon you.

You have a problem.

She may be right though. I have four screens attached to my computer right now, plus a laptop and an unused screen that I could put to use:

A twitter friend is having problems. We’ve had long conversations about the current status quo and how it cannot be maintained much longer without detrimental effects on her health. This is just a bit of what I told her:

When you move out, you’ll feel sad and alone. But you know what? You’ll actually be able to listen to yourself think, and to let yourself feel for yourself.

You’ll miss what you had before because it was what you knew for the longest time. But you’ll slowly adapt to the new circumstances and will allow yourself to relax, and your body will recover.

Then you’ll one day you’ll realize that you’re feeling okay. And that it’s good to be okay.

It’s one thing to feel alone, and another one to feel lonely. Right now you’re not alone since you’re with your mother but you are lonely because she won’t share herself with you. You only get her anger.

When you’re alone and get comfortable with yourself, that’s when you stop being lonely.

I wish someone had told me this when I was younger. I learned it the hard way.

And in case it gets deleted, here’s a screenshot:

Yet the two entities that are called “Twitter”—the San Francisco-based corporation and the character-delimited social network—are not entirely disconnected. And similarly, no matter how many features Twitter-the-company tacks on to draw in new people, it’s still captive to the whims of Twitter-the-network. Recently, I’ve started to wonder if the corporation is trapped in more than a nominal way. What if the network is one of the company’s greatest obstacles, especially when it comes to growth?

Some parts of the ceiling at First Avenue fell down during a show, injuring a few people:
First Avenue ceiling collapse injures 3 or 4

So obviously everyone hopes those people who did get injured are okay, specially concerning a place that has such a legendary story of successful shows. Cue the trolls:

Can I just say something? First Avenue has always been trash. Every time I've been there it's been loud, dark, and full of people.

There were actually a couple along those lines. The things that aren’t relevant are obfuscated. 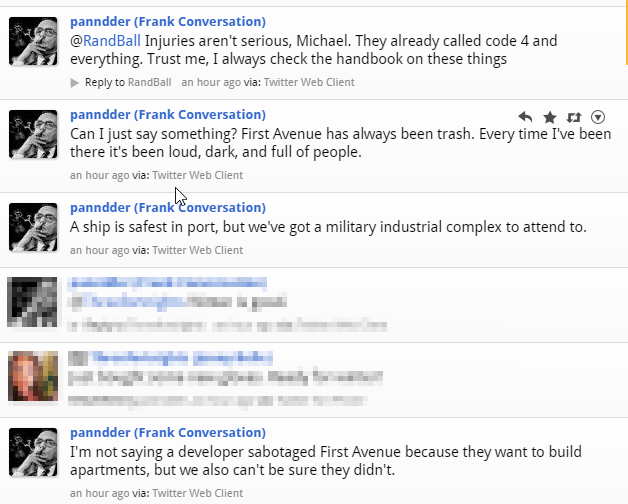 To which the answer as immediate by a lot of people, myself included. When I wrote this, the tweet itself was still there, but I’m just going to leave this up here for posterity and all that. 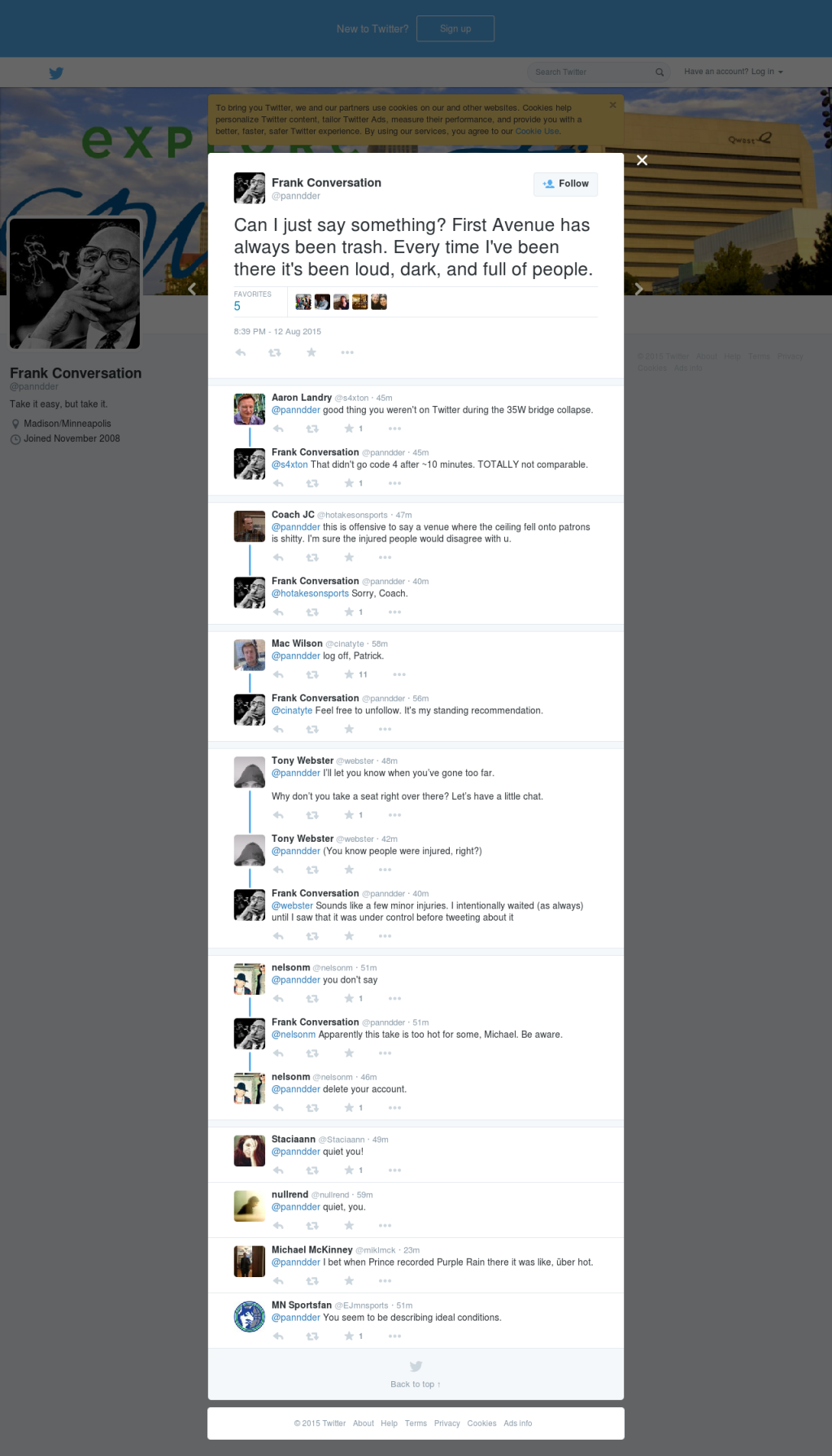 Recently I went through the same thing with someone else, via direct message because the person apparently is too much of a coward to say it out in public:

After that, this lady unfollowed me. She wanted me to change my habits so she would have a better time. Would it have been so hard to just unfollow me? She would have saved herself and myself a bit of trouble. I did have this post floating around the back of my head for a couple of weeks, after all.

Follow crap people and you get a crap timeline. I like to think I’m worth following, but if you don’t like what I say or how I say it, just unfollow me. Your twitter timeline is what you make of it.

All right, so I’ve got this instance of ThinkUp too keep a backup of sorts of my tweets. Everything was working quite nicely until I tried to upgrade the thing the new ThinkUp 2.x beta.

This is where everything went to hell. Not matter what I did, I would get this error when attempting to crawl my tweets:
401 Unauthorized: Authentication credentials were missing or incorrect.

What I didn’t want to do was delete the service user since I’m not clear on what the exact procedure for importing a service user is.

As a last resort, I tried adding a new twitter service user; when attempting to do so, I would get to the authorization page but I wouldn’t get bounced back to the ThinkUp instance. I then proceeded to revoke access permissions for the app, then authorize it again.

Everything worked after that.

Might be a bug, might be how everything is supposed to work, but at least I found a solution on my own since the documentation is rather lacking. 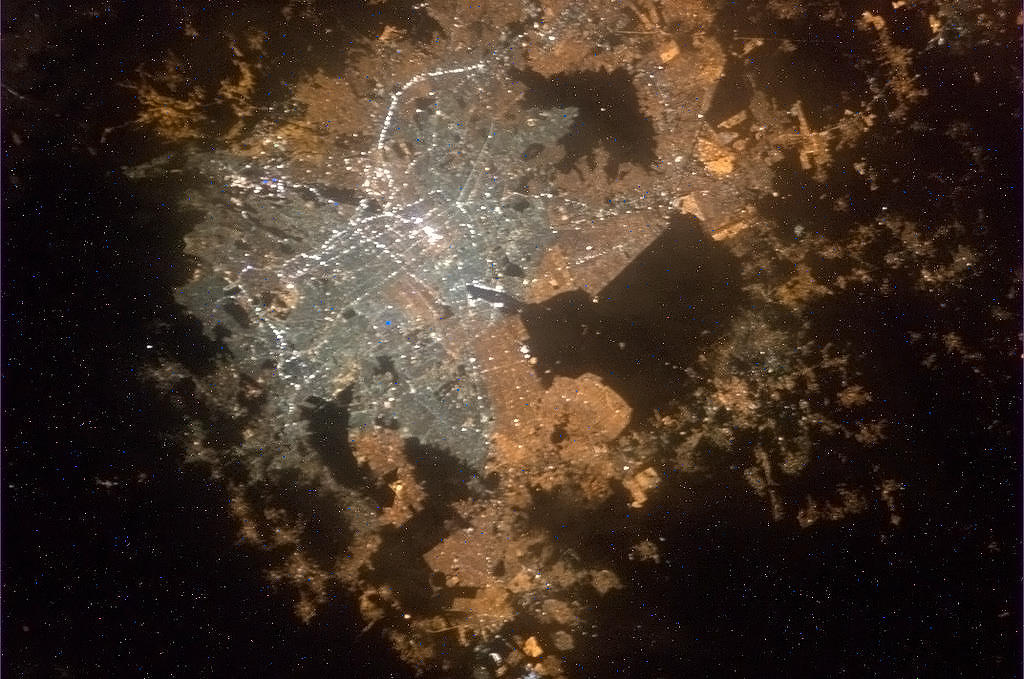 Healthy food, WHY U NO delicious like junk food?

Whoa. The MLA has officially devised a standard format to cite tweets in an academic paper. Sign of the times.

Today on twitter, I saw seven people gang up on one, who committed the crime of unfollowing one of the ringleaders.

It was a valid reason. Yet the aggression was there, unbidden.

I didn’t see the worst of it, but it doesn’t feel right that people would have to watch their backs while out and about because the gang hangs out together in real life as well.

I need to curate my timeline better.

Quick jaunt to Ensenada for #TwittENS and met

Last but not least is Adryx7, who got the thing going to begin with.

It was a pleasure to finally meet you all!