It’s been a long while since that last post I did and my setup has changed a lot:

Actual applications installed on my desktops and laptops

There are some single-purpose utilities I’ve discovered in the interim that are extremely useful for working in Windows 10.

There are some things that underpin all of these applications but I think I’ll leave it as-is. It’s pretty fun to see how my workflow changes over time.

Gordondoes them every now and then, so I’m going to start doing them too:

The most pressing need that I have for myself is a replacement for Tiddlywiki that I can run from this server; it’d probably require me to configure HTTPS but that’s another project worth learning. The main issue then becomes choosing an appropriate wiki that is about as flexible as tiddlywiki without requiring the use of any extensions on the browser. Running this from the server would also allow me to update it from any mobile devices. Tiddlywiki is decidedly desktop software; the clients available for on Android all suck. This is why it’s so pressing for me. I need something that lets me document my life so I can offload stuff from wetware onto software. I’ll keep trying using simple text for now… but I think my mind simply works better using a wiki paradigm. I really do wonder what Twitter will turn into once it doesn’t belong to itself, though. 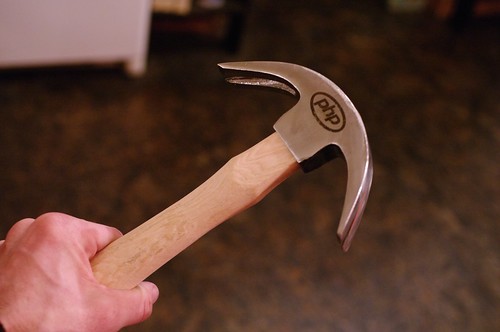 You can hammer in nails with the side, sorta., a photo by raindrift on Flickr.

The original idea was taken from PHP: a fractal of bad design.