Over the past couple years I’ve been using Nextcloud as my file syncing solution with plenty of success— you just have to make sure to set it up properly. I’ve enabled a couple of extensions for it (they call them “apps”) but the one I truly rely on is Tasks, which enables a CalDAV compatible to-do list.

Now, over the past decade or so I’ve tried a myriad of to-do applications and a lot of them really fell down on their face:
– Google Tasks: They change their interface so often, at the whims of whomever is in charge of that bit of code over at google. It tries to be too smart for its own good. It’s a google application do you don’t actually know if it’ll stick around.
– Google Keep: Free-form management sure, but it gets extremely unwieldy once you try to have more than what can fit on your screen. It also tries to be smart. There also the potential for extinction.
– todo.txt: This is meant for people who are on their desk computers all day every day. I’m not.
– Remember the Milk. It’s a paid app. At this point I don’t even remember what the limitation was that turned me off it.
– wiki.vim: Again, meant for desk use.
– Notion: It’s just so slow.
– Evernote: They seem to care more about how your to-do list looks rather than crossing items off it. Also you have to pay for all the goodies.
– Microsoft To Do: You need a Microsoft account and they push hard to get you to upgrade to full-on Office.
– Org Mode: Emacs. Just… no.
– I’m not listing any apps on iOS cos Apple devices are toys. Yes iPhones take awesome pictures but that’s cos they’re toys for adults.
– Mozilla Thunderbird: No built-in sync with other Thunderbird instances. Given that Mozilla is putting all of its resources into Firefox…

I’ve probably tried using a myriad others but decided against them for one reason or another, be it compatibility with my operating systems of choice, UI/UX decisions made by the part of the developers, lack of sane defaults forcing me to change al of the configuration settings, etc etc. At some point you just give up. Now, the Tasks app on Nextcloud is plenty capable and so far it has been the only one that I’ve been able to stick with longer than two weeks cos it covers all the features I want, which I found quite surprising:
– Web-based interface for availability pretty much everywhere you have a browser and Internet access.
– Hierarchical tasks! (aka subtasks) with notes attached to everything so you can document what you did and how you did it.
– Compatibility with pretty much everything out there via CalDAV. It’s a bit of a pain depending on what you’re using (looking at you, DAVx and tasks.org.

This last point is what I have to poke fun at Thunderbird. For an application that is trying extremely hard to run your life, they don’t fully support CalDAV, namely, hierarchical tasks. Found this on their Bugzilla 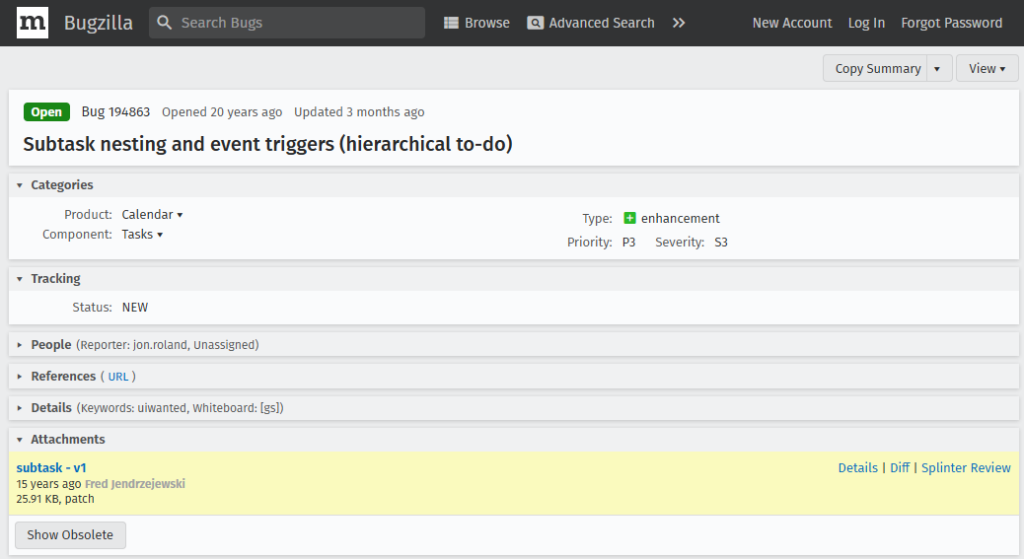 This bug grew up into quite the young adult[/caption]
This bug has been open since February 25, 2003. I’m typing this in January 3, 2023. In less than two months this bug will be able to drink in the United States.

I like you Thunderbird but what the fuck lol.

Alright so after a while we just got tired of vimvwiki and vim-pandoc-syntax fighting over syntax formatting and coloring and we weren’t using all the features available in vimwki so ended up switching to wiki.vim and it’s working out pretty good after we switched the journal configuration from daily to monthly with these settings:

The notes are also in the vimrc file cos we know we’ll forget what each specific setting does. Also, why do vim plugin authors think the vim help file is enough? At least have the fucken decency of making it into HTML so you can link to specific bits of it. We hate reading documentation in vim itself when there are much better solutions out there.

We’re using the barest of features cos we don’t really know enough vim commands but we’re already plenty quick with the ones we know. Now we’re trying to figure out what would happen if we stick this wiki into a git repository and manage it that way, which would be awesome for a todo list.

So what we’ve got right now is usually two windows side by side, one for the todo.md file and the other one for the journal for that month. It’s working out pretty well as long as we remember to do a :wa to write all files to disk so Nextcloud doesn’t complain about version differences between server and clients.

Nextcloud itself is still working pretty good. The VM host it lives in will get rebuilt and I’m thinking I’ll migrate from Ubuntu to Debian when I setup a new VM for it.

Aaaah what else was there…? Ah yeah, got three jerbs now

The todo.md file mentioned above didn’t even exist until three days ago cos it wasn’t needed but now it absolutely is. Stuff is put on paper first (can’t have phone out at barista/host jobs without a manager complaining), then it goes into the file. It’s working out pretty well. Yes there are apps like Google Tasks, Todoist, Google Keep, Notion but they’re all just so slow and then you’re committed to their own specific way of doing things.

No thanks, I’ll just keep everything in text files cos plain text is forever.

Going back to the jobs… life is going to be absolute mayhem for a few months or until we break and get fired from one, which personally hope is the barista jerb— main clientele will be law enforcement and en’t nobody got time for abuse from those entities.

Ah yes! Another useful tool is barinsta. The regular Instagram app just kept giving me ads and that gets so annoying. The interface harkens back to the initial releases of touchscreen apps but the developer makes it very clear they want you to be conscious of your actions while using the app. The fact you don’t get any ads is just an extra benefit of that. Thanks to it it’s super quick to catch up on my feed instead of spending an hour and still be missing stuff. Install it from F-Droid and if you see anyone trying to put it up on Google Play, report it to the devs.

Pretty sure that’s it for now.

The core interaction of your product – Your product exists to save people time or help them solve a problem. Introducing friction or delay during the most important flow of your product will drive people crazy. Notion has developed a reputation for being a sluggish product:

I wanted to love Notion. I did! It’s everything you’d want in a note-taking app. But it’s fucken slow, which made me hate it.

This is why I stick with vim and wiki.vim— This just made me realize I haven’t updated that series of blog posts.