Some people, women as well as men, find the idea of women in power terrifying and hence will believe anything about them.

Source: Why Was She So Hated? | by Lynn Hunt | The New York Review of Books

Such as then as it is now.

This blog is so, so good, should you like to read about ancient history.

As the historian Barry A. Crouch recounts in The Dance of Freedom, Ruby warned that the formerly enslaved were beset by the “fiendish lawlessness of the whites who murder and outrage the free people with the same indifference as displayed in the killing of snakes or other venomous reptiles,” and that “terrorism engendered by the brutal and murderous acts of the inhabitants, mostly rebels,” was preventing the freedmen from so much as building schools.

Source: What Black Lives Matter Has Accomplished – The Atlantic

White people have always been the one to terrorize their communities, and those of people they don’t deem acceptable.

The cold cultural war heats up.

In this case the old West Indian world, of which Tennessee lay at the northern fringe. It’s the shatter-zone of the slave diaspora. Circulating currents. We gave Jamaica blues. Jamaica gave us ska. Jamaica gave us dub, we gave back hip-hop. It’s been happening for four hundred years.

Source: That Chop on the Upbeat

More than you thought you’d want to learn about the origins of ska.

Looked at from another angle, in the past soft food was more prestigious than crunchy food. I had always put this down to two factors. First, that soft food was refined food, refined in the same sense that metals are refined, processing out the dross and getting to the pure essence or nature of the food. Second, since only the rich could regularly afford laborious soft food (easily pounded or mashed roots being a major exception), soft food was desirable food.

Source: Of Soft Food, Now and in the Past | Rachel Laudan 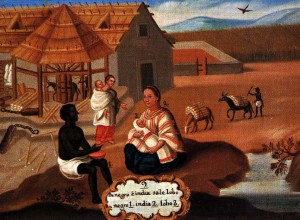 A longform article in The Atlantic.

In Douglass’s time, to stand up for black rights was to condone black criminality. The same was true in King’s time. The same is true today. Appearing on Meet the Press to discuss the death of Michael Brown in Ferguson, Missouri, the former New York City mayor Rudy Giuliani—in the fashion of many others—responded to black critics of law enforcement exactly as his forebears would have: “How about you reduce crime? … The white police officers wouldn’t be there if you weren’t killing each other 70 to 75 percent of the time.”

The whole article is a very illustrating read on why things need to change.

There was really no threat of invasion though. While the final battle between the Mexica and the Native/Spanish forces is often lumped together as the "Siege of Tenochtitlan" there were skirmishes and battles happening around the Lake Texcoco basin.

via 400-Rabbits comments on What were the fortifications of Tenochtitlan before Cortés' conquest?.

I had always imagined that the Siege was mostly an overland affair, never really taking into account the fact that the whole city was on an island. Yeah, sure, the fact Cortes had ships built is mentioned, but you can’t have a clear idea of how they were used with two or three paragraphs in a school history textbook.

It shows the influence of modern geography on the perception of events that happened centuries ago.