As a rule, the coders liked to code and make computers do new stuff, and the sysadmins liked to make sure said computers worked smoothly. Coders would eagerly explain that with some easily acquired new kit, they could revolutionise things for the business, while sysadmins would roll their eyes and ask how this would affect user management, or interoperability, or stability, or account management, or some other boring subject no-one wanted to hear about anymore.

And for the past ten years coders have ruled the world and have broken it into ever smaller pieces for the marketers to be able to sell them to others.

Sysadmins still make sure to prevent coders from breaking organizations but we can only do so much.

At work I use a Thinkpad w510. It’s one of those big slabs of computing that brings you joy to use. It has ye olde scissor switch keyboard that everyone knows and loves. I hear the new chiclet style keyboard is decent… but just that, decent. This keyboard is the real deal, behold: 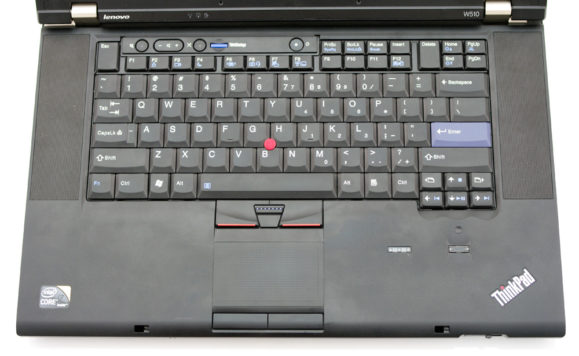 There’s only one problem. The machine has a Nvidia Quadro FX 880M. This is a really damn nice GPU to have on a laptop and I’m thankful for it. The problem is it runs hot, uncomfortably so for the workloads that I throw at it. This means I ended up having to use an external keyboard to avoid having my left hand run a full 10° higher than the rest of my body. I ended up with this, a regular Apple iMac keyboard:

Since I’m using it on Windows I have to deal with Apples outright disregard for its hardware users on platforms that are not macOS. Now, with this said, I’ve been looking for years for a PC keyboard that has the same key feel as the stuff Apple makes plus a few things:

At home I use a Corsair Gaming K55 RGB keyboard. It’s got all the goodies I outlined above minus the USB hub but it does have backlighting:

It’s a nice piece of kit. Not that loud since it uses regular plastic switches as opposed to mechanical, but you can still feel a nice clack when the keys bottom out.

So basically what I want is a flat keyboard like Apple makes but with a bunch of extra keys. Got some benefits for it:

I’ve been looking for something like this for years, and no manufacturer has stepped up to the plate. They’re all trying to chase the look Apple has but they come up severely lacking when it comes to the functionality. This would be a keyboard for people who are not afraid of buttons on their devices— say, DIP switches on the back to emulate various settings, like the CODE keyboards do. If some Chinese upstart were to start making a device like this and not load it up with a secret keylogger it would probably do pretty well for itself.

But what do I know. After all I’m only looked at as a kitchen hand these days.

There was a tweet from @findchaos that made me remember a conversation I had with a coworker at my kitchen job a few days ago.

This guy is from a poor part of Mexico. Whenever I ask specifics I just get grunts or non-answers, because he gets embarrassed. He knows he’s in over his head on these matters and I am understanding, but there’s so much I can do without kissing his ass which I will not do.

So with that said, I recommended a few models from the Dell XPS line, the Lenovo Thinkpad line and a couple of Samsung laptops I saw for cheap on Amazon. The guy was quite insistent that he wanted a “Sony laptop” if he couldn’t get a cheap Apple laptop. It didn’t matter what the sub-brand was since Sony has a few, most of them with the esoteric model names so favored by this manufacturer. I kept asking if he wanted a Vaio, but he just answered “I want a Sony laptop if I can’t get a cheap Apple laptop”.

After a while of circular arguments on his part I eventually ended the conversation with “If you don’t want to pay over a grand for a computer from Apple and you don’t like what Sony or Dell or Lenovo or Samsung or anyone else has to offer then I can’t help you. You have to decide what you want and all of it costs over 500 dollars from what you say you want.”

That shut him up.

From this I get a few things:

In writing this I forgot the original point of the post, but that’s okay. At least this is now out there since it happens somewhat often. People ask me something, I try to obtain more information to provide better advice, then they clam up because they realize they don’t even know what they want or what the person that wants the thing wants.

I’ll just go along with it.

There are a few things that I have to make clear, though, as the entire conversation was conducted in Spanish:

The man puts into words something I’ve attempted to explain, unsuccessfully, to anyone who asks me for recommendations regarding computers.

The question usually goes “What computer should I buy?”. When I answer they should buy a MacBook, they say I’m an idiot for suggesting they buy something that expensive. Then I tell them to buy a Thinkpad, and they think it’s ugly. Then they go out and get a cheap Dell, them come to me complaining it’s slow.

I’ll just give this argument, and hope the person is intelligent enough to catch the argument.

So there’s this article on the NYTimes about Ubuntu’s focus on reaching the Mainstream. It’s a pretty good read. But it won’t happen.

Why, you ask? Because of sound. You know, the thing that your brain processes as auditory input.

I won’t say much about it, since others have already said it far better than I could:

I’ve only tried to get a headset to work on my computer with Skype. Had to fiddle with settings for an hour before Skype worked the way it was supposed to. Mind you, this is a cheap-ass run-of-the-mill headphones-and-microphone headset without any controls; none of those nifty USB headsets for me because I know they do not work with my choice of operating system.

All of those APIs, sound servers, systems and daemons… they’re Augean cattle mucking up the stable, and they need to be slaughtered and the stable cleaned out. Perhaps Mr. Shuttleworth is up to the job.

Sound on Linux? It is completely broken; whenever you see articles announcing “This is the year of Linux on the desktop”, please proceed to abuse the author to no end.

I say this all as a Linux user — both at home and at work — and as someone who pushes open source software on everyone. Guess I’ll have to stop doing that and push people towards Apple instead.

So my damn computer decided to die. It had been giving me some issues before, where it wouldn’t power on after being shut down for more than a few minutes. It’ll be at least two weeks until I’m able to put a new system together and I’m not sure what I’m going to do during that time.

Not quite sure what to do. I should get a radio or something.

From left to right we’ve got

We’ve got the obligatory hotmail email address. Inspires terror… but on the computers to be torn apart for parts.