There are a few things that annoy me to no end and one of them is when software developers have to give in to the marketing critters and start adding shit and cruft to their installers or to the configuration of whatever you install. Case in point, AMD: 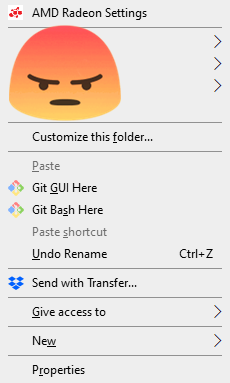 AMD has zero need to put their stuff there, but they did. So I looked around for a way to remove it and found this post. Given corporation’s propensity to remove things from their forums without warning (looking at you, Intel), I’m just going to repeat the method here:

It was my problem too.

Open up regedit.exe through the start menu search or run box, and then browse down to the following key:

Double-click on the (Default) value in the right-hand side, and then add some dashes in front of the value to disable it. You should be able to right-click on the desktop and see that the item is removed.

Turns out that specific registry key also contains the entries for other things, like Dropbox, VLC, etc etc, so I went around changing some things I found disagreeable.

Edit the registry at your own risk

Not my fault if you fuck up your Windows box.

Okay, so I just got a Radeon R9 380 in the form of a Gigabyte G1 Gaming video card. It’s the first real GPU I’ve had in years and years — the last real video card I had was back when AGP2 was all the rage.

Again, nothing out of the ordinary. Just the usual things that you should always do when installing new hardware on a Windows system. After reinstalling the AMD Catalyst drivers from the card manufacturer’s website, Catalyst reported there was a new driver for the system and it was going to update. Updates are more or less necessary, right? So I downloaded and updated.

This is where you can start to tell something at AMD went wrong and the marketing people are now running the company: 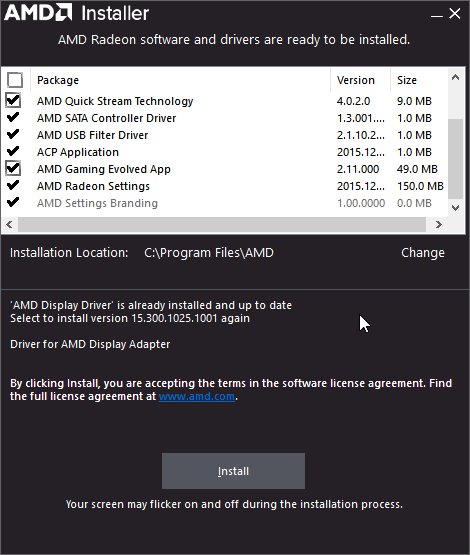 “AMD Settings Branding“? What is this? And why cant it be disabled? It’s quite enough that Microsoft keeps pushing unwanted software when you’re using Windows 10. There’s “AMD Quick Stream”, which doesn’t really tell you what it does. Then there’s the “AMD Gaming Evolved” app which is a barrel full of worms.

Okay, so I decided to install everything and see what was up. Reboot. All the AMD applications are configured by default to start on system boot.

Set about to disable that. I’m including screenshots because the UI for the applications is not exactly the simplest, and it is very different from what the old Catalyst drivers looked like, and cos I’ll probably forget about this in a few months.

The entire middle section of the window is a link to this page.

There’s an option for “Banner Advertisements”. Come on now. I’m running adblockers on all my browsers and yet here we have a hardware manufacturer trying to simply bypass all that. Seeing this made me wonder what else was in store on the other apps, which leads me to… 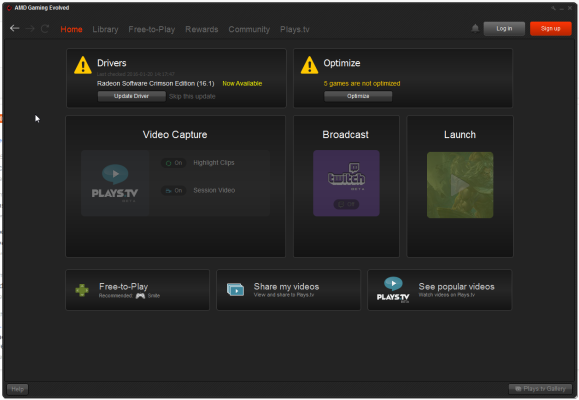 This doesn’t look that bad. It looked for games that I have installed on my system and then suggested optimized video settings for them. Okay, that’s nice, now I don’t have to go about configuring each game one by one. But I certainly do not want the application to start at system boot. To find the preferences click on the little wrench icon next to Minimize up on the window title bar.

Landing here after clicking preferences and disable start on boot for… Raptr. I thought I was in the AMD Gaming Evolved app? Where did this “Raptr” thing come from? AMD needs to get their branding in order, really. So disable start on boot. Scroll down and another surprise: 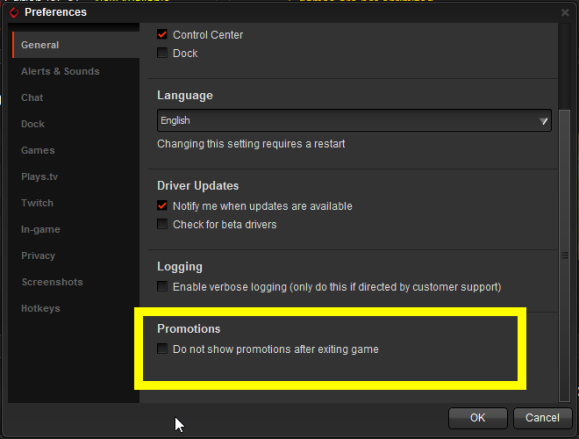 “Promotions”? I don’t want any of that. Why would I do that to myself? Disabled that. 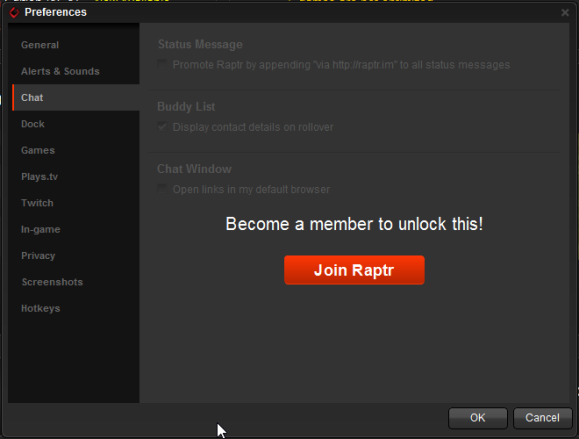 This makes me thing that “Raptr” is the name of the application and the name of an upstart social network for gamers that will be run by AMD or a company it hired for that purpose. It’ll have to compete with Steam, EA Origin, PlayStation Network, Xbox Live and a few others.

I wonder how long that will last. Running these things is expensive and prone to failures of all sorts; that’s before even starting on DoS and DDoS attacks. 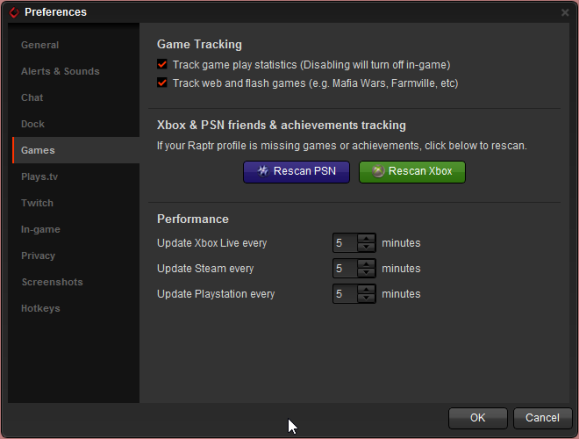 This is useful for some, I guess

Again, useful if you use it. 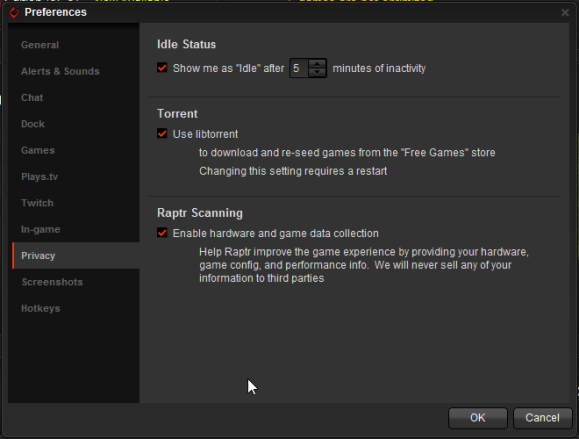 This is a clusterfuck, plainly stated.

How long until someone figures out how to turn this into a vector to spread malware? Until something goes wrong and it starts using all the available bandwidth all the time?

I am not okay with this.

Aha. Here we are. Be lazy and let the thing configure all the settings for each game separately? You have to let AMD mine your computer for whatever information they decide they want.

Thanks but no thanks.

Eh, whatever. They’re there.

AMD Quick Stream Technology is an Internet stream optimization software powered by AppEx Networks’ IPEQ (IP End to end Quality Of Service) technology that prioritizes and shapes the Internet data streams flowing in and out the PC, allowing the high‐priority streams and apps to dynamically enjoy the better network resources when competing the limited bandwidth with other less important ones. At the sametime it boosts the overall Internet performance by shaping both the inbound and outbound traffic to eliminate or reduce the chances of traffic congestions. AMD Quick Stream Technology offers the end users smoother and enhanced Internet experiences.

According to me:
Bufferbloat.

If you search for “AMD Quick Stream” most of the results report that people have issues with the software. I did have the “license not found” problem, which I fixed by uninstalling the application.

So the solution for all Quick Stream issues is to get rid of the application. Simple.

That’s my reaction to all this. It’s just a bit much that if I want to have a great gaming experience, I have to give up not only the cost of the hardware but also to give up a lot of privacy in order to have the tiniest bit of convenience, all so AMD can make a bit of money.

I’m uninstalling everything but the driver itself and will look around for a solution to the “AMD Settings Branding” thing. I’m pretty sure there should be a way to repackage the drivers so you get what you need to run your hardware and only that, without any extraneous bells and whistles.

This is a bit disappointing. I expected more of you, AMD.

The Symptoms:
System is a laptop, namely a HP Pavilion dv7-4060us Entertainment Notebook PC. Upon pressing the power button, CPU fan spins up, then spins down to nominal speeds, caps lock light blinks once per second, WLAN light is a solid yellow/amber, and the LCD screen does not power on at all (as opposed to powering up but being blank) so there is no indication of POST.

This points right away to some sort of hardware failure, since the computer is by this point an eight pound paperweight.

Checking HP’s support site for the DV7 gave no indication of HP even acknowledging the issue even exists.

A quick Google search gives various articles but the first two are the most relevant. This is from the first forum post:

“I’m on my sister’s laptop right now because when I went downstairs earlier my own computer decided to ‘check-out.’ Came back, black screen, flashing caps lock, tried to reboot, tried the hard reboot, nothing.

“Found a forum where some whack job with the same problem wrapped theirs in a sweater for 30 minutes and it fixed the problem. Click to the next page, tons of people swearing it works. Apparently, the intentional overheating causes it to power down appropriately then reboots. We’ll see if that works.”

While the second post appears to shed a little more light on the problem:

So I take it home, try usb bios reflash, no go. Capslock light blinks, no other lights, sounds, nothing.

Ok. So I open it, get my harborfreight heating gun and heat up both the video chips. The AMD one and the ATi one. As shown in picture below.

As soon as I put it all together and plug it in, it starts working and has been, constantly since two weeks ago. This laptop has not been turned off, standby nothing. Works perfectly. Sound, video, HDMI port all alive. Still switches video cards when you unplug the power adapter.

Also, this same solution worked for a Compaq Presario CQ60. That laptop didnt pickup the bios reflash either no matter what I tried. Turned on immediately after heating the video chip.

This reminded me of the Xbox 36’s Red Ring of Death (There’s even a wikipedia article for all the issues it had!) and the first solution people found for it: The towel method. iFixit later came up with a more elaborate method that, like the post on Notebook Review, targets the culprit component: the video chipset.

The DV7 was turned on, wrapped in a blanket, and left alone for half an hour. When the time was up, the laptop was turned off and let cool down for fifteen minutes. Powering it gave the symptoms. Laptop was turned on again, wrapped in a blanket, and then in another blanket, and left alone for two hours. When time was up again, laptop had powered off by itself. Unwrapped it, let it cool down for fifteen minutes. Power on gave POST, along with a helpful error message from the BIOS complaining about there being no hard drive installed in the system.

Hard drive was reinstalled. Powering on gave POST, then Windows boot. Windows didn’t seem to have any problems apart from having the wrong datetime, but that was expected since the CMOS battery was taken out. Device Manager reported no hardware issues

Commentary
Since the hardware is now suspect, I told the owner of the laptop to better start saving for a replacement. At least now the whole thing turned from an unexpected monetary outlay into an expected expense. What gives me pause is that the DV7, like the Xbox 360, also has an AMD Radeon video chipset, so it could indicate an issue with AMD’s fabrication processes and that other laptops that have come out with the same chipset or components from the same AMD manufacturing lines will have the issue as well.