I recently got one of these and ran into issues when attempting to load the Windows 10 installer. Plugged power, VGA, keyboard and then turned the thing on. BIOS prompt popped up and nothing fancy, just your usual UEFI BIOS that makes everything pretty and a pain in the ass to get to.

All the people writing these things clearly hate using their keyboards. But anyway; made some changes in the BIOS and everything seemed to be okay.

Cue the Windows 10 installation. Got out the USB stick with the Windows installer, plugged it in, booted. I could tell everything was much, much slower than usual. Just getting to the “Install” button took about six minutes.

Start poking around the UEFI again: 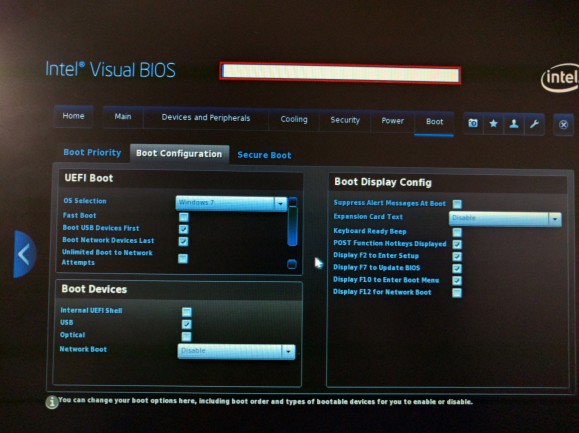 Since I was installing Windows 10, I picked the first option. I think this is was made the Win10 installation go awry. Set it to Windows 10, rebooted, and OS installation went off without a hitch.

The only problem after that was the SSD having disk errors, argh.

I’ve been trying to get the damn Debian Wheezy installer to work via USB on a Thinkpad T60 for the past three days without any success. Sure, it works like a charm when put on a CD or a DVD and booting from there, but that is beside the point.

I’ve tried various methods I’ve found on the web and on the Debian wiki without avail. To use any of them, you need to fuck around with the terminal, or installing things (as in the case of unetbootin). As it is right now, most Linux installers still can’t easily be put on USB drives without fucking around on the command line and getting things wrong a few times.

I realize I’m just venting, but… really, it is now past mid-2012. Apple is selling its OS X via digital delivery. Microsoft is about to do the same with Windows 8, and did sell Windows 7 installers on USB drives.

Linux should have gotten there years ago, to make it easy for people to try it out and keep their files around with them. Instead, we have lots and lots of guides for “the perfect $LINUXDISTRO USB install”, all of which are outdated within a few months. This would have led to Linux spreading virally among the common user, instead of just staying in the nerd ghetto.

Combine this with motherboards implementing UEFI and Linux installers not supporting it, and the future is getting ever dimmer for “Linux on the desktop.” Next time someone says “This is the year of Linux on the desktop” I will laugh at them on their face.