Like I said before, I finally got enough money to build me a new computer. I looked around for what would be the best components for a cheap machine and wound up using the list provided in the Ars Ultimate Budget Box System Guide, except for the case; all components were ordered from Newegg.com. I had to use my old IDE hard disks since I didn’t have enough money to get a new big SATA disk, and with the economy in shambles, it’ll probably be a while before I can get one. Used my old DVD burner too, plus old keyboard and mouse.

Put the system together, then installed the Ubuntu 8.10 Intrepid Ibex Release Candidate. Now that it’s gone gold, it’s just a matter of keeping the system updated. Like I said before, Intrepid is running much better than Hardy ever did and promises to keep getting better. The first step for that is to get rid of the orange/brown color scheme and go with something else, like me: 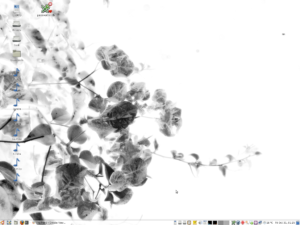 If anyone likes the background I’ve made the original image available. A smaller 1024×768 version is available on my Flickr account too:

At the end I couldn’t decide on a proper name for the system and decided to name it alkhemy, since it’s a mish-mash of old and new stuff with a layer of VM action on top. It’s a pretty good machine that with a bit of luck will last me a good while.